The television presenter and academic met curators for a tour of the exhibition before sharing her thoughts on some of her favourite artefacts on show.

She had heard about the exhibition following visiting the museum last year to film a Viking documentary which will be aired in the summer. Alice said:

“The Vikings are such an iconic part of our heritage and history. They tend to be portrayed as either bloodthirsty raiders or mercantile traders, but they were much more complex and interesting. This unique exhibition brings together objects which help us to understand them and their world.”

The exhibition, in partnership with the British Museum, includes the most significant Viking treasure hoards ever discovered in Britain as well as iconic finds such as the Lewis Chessmen, the York Helmet and the Vale of York Viking Hoard.

It also features ground-breaking Virtual Reality of Torksey, a Viking winter camp, which visitors can explore using specially designed headsets. This was created in partnership with the University of York.

The exhibition opens today (Friday May 19) until November 5.

It will then tour to the University of Nottingham Museum, The Atkinson, Southport, Aberdeen Art Gallery and Norwich Castle Museum. 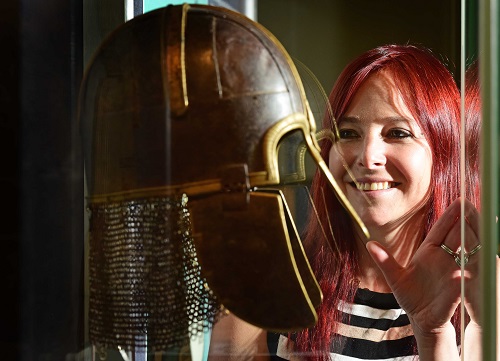