Step foot into the dramatic lost landscapes of Jurassic Yorkshire and discover the giants which lived there in a major new exhibition at the Yorkshire Museum.

Yorkshire’s Jurassic World will combine internationally significant collections with the latest technology to transport visitors back to the deep seas, tropical reefs and dinosaur country which made up the land we now call Yorkshire more than 150 million years ago.

“During the Jurassic Period (201-145 million years ago) the land we now call Yorkshire was unrecognisable. At the start it was covered by deep oceans where huge, ferocious sea dragons hunted alongside sharks and fish. As time progressed it became a landscape of vast rivers and flood plains where some of the biggest dinosaurs who roamed the Earth called home. Higher sea levels then plunged it back underwater to form a tropical scene, with colourful coral reefs teeming with life.

“This exhibition will allow the visitor to take a journey back to explore these lost landscapes and meet the creatures which inhabited them. We will be showcasing the best of our collections discovered right here in Yorkshire and using new technology to interpret them in new and exciting ways.”

The exhibition will be split into four sections:

With a life size plesiosaur overhead and a dig zone where people can hunt for fossils, this is a gallery that will set the scene for the exhibition. It will look at the history of the Earth, putting the Jurassic Period in context and introduce the ideas and discoveries that form the basis for much of what we know today about this period.

Visitors will be immersed into a tropical world of shallow waters alive with coral, fish, starfish and other sea life. Fossils from the period will be displayed alongside illustrations and animations demonstrating the colours and movement of the creatures. CGI environments and LED lighting will give the impression of being surrounded by the scenes, a large rock structure in the centre will invite you to sit and discover more and to make your own fossil rubbings of the replica fossils.

The next gallery will plunge visitors down into the depths of the Jurassic oceans. The museum’s internationally significant and immense Sea Dragon fossils are brought to life through Augmented Reality. Pick up an iPad and see the huge ichthyosaur and two plesiosaurs depicted at full size with realistic skin tones based on the latest research.

The gallery will also show the strength of the museum’s collections from this period, with ammonites and belemnites, once eaten by the sea dragons, and the rare fossilised remains of embryonic ichthyosaurs are show in a “collider case”. This technology allows the fossilised baby itchyosaurs to “swim” off the rock and around the case before your very eyes.

Visitors now enter Dinosaur Country, surrounded by trees, plants and dinosaurs. Here, CGI dinosaurs can be seen scampering across the fossilised muddy flats which contain real dinosaur footprints. A full size Megalosaur will be depicted on the wall, with fossils showing the size and ferocity of her teeth and claws. On the opposite wall a life size pterosaur is shown, the creatures which took to Yorkshire’s Jurassic skies. Real footprints of these creatures will also be shown.

In the middle of the room will be Alan – proof that some of the largest dinosaurs that roamed the earth once lived in what we now call Yorkshire. Alan was named after the finder of a huge vertebra from the oldest true sauropod dinosaur ever found in the UK. Sauropods (often referred to as ‘brontosaurs’) were plant-eaters, and the largest animals ever to have walked the Earth. They were a successful group for nearly 150 million years.

Nearby is the chance to put on a Virtual Reality headset to meet a towering sauropod and feed it lunch. Fossilised plants, another strength of the museum’s collection, will also be shown in this room, giving an idea about what the dinosaurs could see and what they ate. 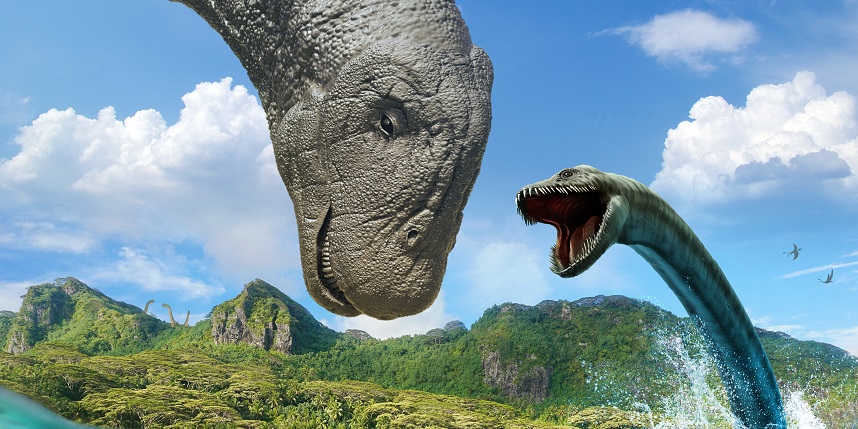